If issued further to procure funds for modernization/diversification/expansion, such issues are called further issues or seasoned issues. Initial public offering shall not be confused with the term ‘offer for sale’. A company can either create new shares or offer these to the public. This is referred to as new offer of shares.

On the other hand some existing investor, including the promoter, can also sell a part of the stake that is held by them and this would constitute an offer for sale. Offer for sale implies that existing stake is sold and from the company’s point of view no new shares are created. Many of the issues in recent times have been a mix of both fresh issues as well as an offer for sale. It is necessary for any investor to understand the difference between the two as it affects the valuation and several other parameters that investor need to consider.

For example, earning per share is one of the ratios, which are commonly used by all investors. In case new shares are issued to the public then the number of shares outstanding in the company goes up, which will impact the future EPS to some extent, as the profit will then be divided by a larger number of shares. This can further go on to impact other related ratios like price earning of the shares. If the new shares are at a premium then the net worth of the company would also move up resulting in an impact on future return.

At the same time an offer for sale will leave the total shares at the previous level thus resulting in not much of an additional factor impacting the ratios discussed above and other valuations figures. If one goes further then there are some indirect impacts too – one of them is the question of dividend.

A rise in the capital base leaves the profit to be distributed among a higher base. The investors also need to keep an eye out for the liquidity aspect as an increase in liquidity will benefit shareholders as a large number of shares will be in the market.

The IPO market being a part of the primary market is an important constituent of capital market which plays a significant role in the economic development of the county by transferring resources from the surplus unit to the deficient and productive units. It is because of these reasons the IPO market has been chosen as subject matter of study.

This has occurred not only because of changes in the economic conditions but also due to the changes in guidelines announced by SEBI from time to time in a bid to improve the state of the primary market by allowing only good companies to raise the funds through primary market.

The growth pattern of Initial Public Offerings in India during the period of sixteen years from 1991-1992 to 2006-2007 has been analysed to bring out the diversities in the Initial Public Offerings as well as to point out the various attributing factors for such diversities This analysis is made with the help of data relating to numbers and amount of initial public offerings and their related indices. 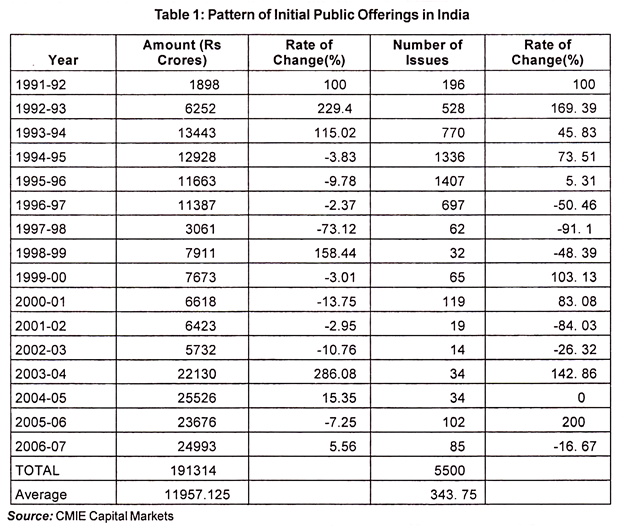 On the other hand, the year 2004-2005 has accounted for Rs.25,526 crores from the public claiming highest amount of capital raised during the study period. The year 1991-1992 which is marked as a period of reforms process has helped to mobilize Rs.1,898 crores from the public. This was the year of high expectation for the investors who were trying to invest the money in changed economic and liberalized period that has ignited the attitude of investors to invest their savings in various public issues in the later years.

If we look at the trend of amount of capital issues raised, we find that amount of Rs.1,898 crores raised during the year 1991-92 increased to Rs.6,423 crores in the year 2001-2002 indicating a growth of 238. 40%. It shows that despite the downward trend in number of Initial Public Offerings, the amount of capital raised has not declined.

Investing money in initial public offerings with the objective of acquiring listing gain is not an easy task for the investors. Instead of locking up your money with the application and waiting for the listing of the scrip, it is better to purchase a share from the market. This is because of the fact that the listing gains i.e. the returns on the initial public offerings scrip at the close of listing date over the allotment price have almost disappeared. The average listing gains have fallen sharply from 38% in 2005 to as low as 2% in the first half of 2007.

The initial public offerings through book building which has been come out in India between 2000 and 2007 is 159. Out of the 159 book-built initial public offerings, two-thirds saw listing gain. However, these gains have evaded sharply in recent age, while the listing gain was 38% in 2005 over 34 investors it fell to 30% in 2006 over 61 investors and to 2% in 2007 till mid-April over 34 investors.

The main reason behind the sharp fall in listing gain is aggressive pricing. Aggressive pricing means that the scrip is often being priced at the high end of the pricing range which would, restrict the upward movement of the stock, leading to reduced listing gains for the investors.

In the year 2007 many initial public offerings are trading at discount because of aggressive pricing. Out of 56 companies that entered the capital market in 2007 (till august) shares of around 25 companies are currently trading below their offer prices.

The shares of recently floated IPOs like Oriental Trimex, House of Pearl Fashion and Technocraft Industries have fallen from 30 to 62% from their offer prices. Initial public offerings normally priced within the range based upon the sentiment prevailing at the time of issue.

As a result, with the change in the conditions in secondary markets, the prices of the stock concerned can go at discount or at the premium to the issue price. Generally, it has been noticed that initial public offerings which are fully priced can go at discount due to the changes in the sentiments of the market. Whenever there is a slightest deterioration in the market, pricing of initial public offerings gets affected.