Hardware refers to the physical units i.e., the electronic devices etc., which make up a computer system.

There are three basic hardware components of a general-purpose digital Computer:

In other words, hardware involves equipment which can perform the following functions:

Hardware is the jargon term given to the machinery itself and to the various individual pieces of equipment. When the hardware is linked together to form an effective working unit we have a Computer Installation. (Fig. 36.4). 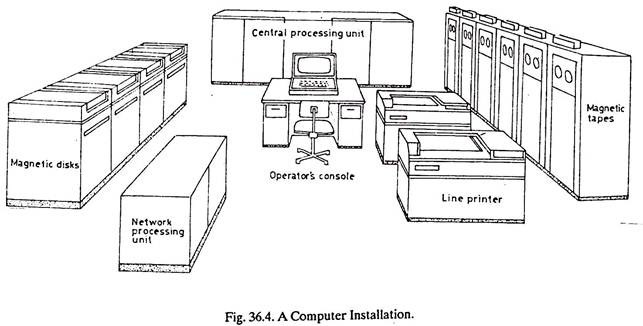 However, you can do nothing useful with the computer hardware on its own. It has to be driven by certain utility programs, called Software, which are input and stored permanently in the computer system.

Any problem before it is fed into a computer should be programmed. That is, the necessary operations to be done should be written in a systematic manner. These instructions/program as a whole are called software. These programs are written in a language which the computer can read and interpret.

All the forms of programs associated with computer which command the computer to work are called soft-wares. Software consists of non-hardware aids, namely computer programs and computer routines which facilitate the operation of the computer by the user installation.

These aids consist of computer programs for standard tasks such as:

(3) Translating programs written in a symbolic language into machine language instructions, and

Software are a collection of programs written to bring the hardware of a computer system into operation and to best advantage. Software includes programs, languages, procedures, rules and associated documentation used in the operation of a data processing system. The term software can include user programs, but more commonly refers only to general programming and operating programs which-are made available from the hardware manufac­turer. Software is as vital to effective use of a computer as the hardware.

(a) Assemblers provide a means of converting symbolic language programs into the machine lan­guage instructions required by the computer on a one for one basis.

(b)The Compiler is the link which translates a symbolic language (COBOL, FORTRAN etc.) into the form suitable for specific makes of computer and also performs the function of an assembler.

Software are grouped into two classes:

All the persons associated with computer in any way may be called human-ware, e.g.:

(1) Systems analyst, who studies information and processing requirements. Designs the flow of operations and prepares other specifications for the processing system.

(2) Programmer, who has a skill in writing computer instructions.

(3) Computer operator, who operates the computer.

A program consists of a set of instructions to the computer to perform operations which accomplish processing task. A data processing job may require a number of programs. The user normally writes his own programs for applications unique to his installations. However, generalized applications programs can be purchased or leased from software organizations.

The terms Routine and Program are somewhat synonymous. Routine refers to a set of instructions to perform a particular process. A program may consist of one of more routines-for example, an input routine, a processing routine and an output routine.

The operation of a data processing system requires procedures for use:

(1) In obtaining and preparing data,

(2) For operating the computer,

(3) For distributing output from processing,

These procedures include control steps such as actions to be taken in the event of errors (or actions) if there is a malfunctioning of the equipment.