Here is an essay on ‘Profit Planning in Banks’ especially written for school and banking students.

Banks are commercial organisations. They are there to earn profits and provide good returns on the equity. However, they have the role of a financial intermediary. Banks accept deposits and lend monies to industry, trade, agriculture, consumption, housing, etc. They are the trustees for the deposits kept with them and have to perform the sacred duty of protecting the depositors’ funds.

They are also expected to give some fixed returns to the depositors. In this capacity as a trustee for the depositors, a Bank’s role may have variance with its responsibility to maximise the profits for its owners. Banks are, therefore, required to be cautious in their dealings and manage the risks in a prudent manner.

Similarly, the interest incomes on highly rated corporates are much lower as compared to the income on lower rated corporates. Banks are required to have a proper blending of investment in government securities and credit portfolios to maximise the profits for a given level of risk appetite. Let us take one example of various combinations. Suppose, a bank has Rs 1,000 to invest or lend.

We look at four different scenarios as follows: 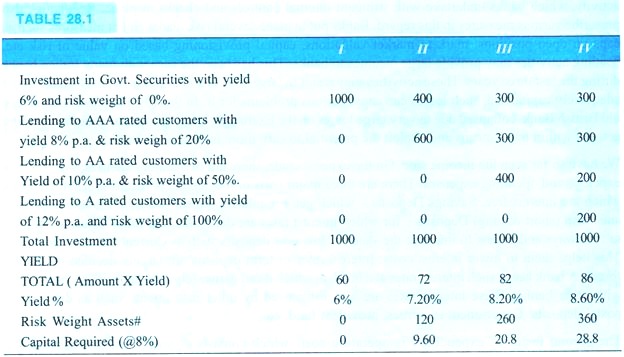 Thus, you would observe that risk would increase for lending to lower rated customers resulting in an increased need for capital and also improved yield on the assets. Banks need to optimise the investment and lending portfolio to earn the best possible returns for a given capital level.

Banks have to take into account the effect of NPA on the interest income and thereby on the profitability. NPAs do not generate income and therefore bring down the yield on advances. Also, under Basel-II regime, the risk weightage of such assets is higher, thereby forcing a bank to maintain higher capital. Thus, NPAs have two-fold effects, reduction in income and need for additional capital. Hence, return on capital or profitability gets further deteriorated.

The second major source of income is derived from fee-based activities. The traditional activities such as demand drafts, remittances, safe custody, guarantees, letters of credits, bills, etc., continue to be prevalent. However, with technological changes, some of the services such as demand drafts, remittances, bills handling may reduce drastically.

Some new services like depository services, internet banking, e-commerce have appeared on the scene. These services have given a boost to the fee income or else have resulted in a higher minimum balance requirement. The banks have been introducing several innovative products and services with the advent of technology.

Banks have also ventured into cross selling of other financial products such as insurance policies, mutual funds, etc., with established network and position of trusted entity for its customers, a bank can make logical and natural entry in the selling of such third party products. Banks thus tend to become financial super markets and such measures help increase the fee-based income. Banks are required to keep in mind the operational risks associated with these new services.

The last and most important component of income is treasury income, which is derived by trading in securities, foreign exchange, equities, bullion, commodities and derivatives. This is largely a speculative activity, which banks undertake with stringent internal controls and checks in place.

Regulators also prescribe various measures in this regard. Banks put in place several risk management measures such as caps on open positions, mark to market valuations, capital provisioning based on value of risk etc. Trading activities may provide large incomes to banks. This has been the case with many Indian banks during the last three years.

These activities may result in large amounts of losses as well. If a bank is not adequately capitalised, such losses can cause serious problems for it. In the 90s, Barings Bank, a very old British Bank, collapsed due to very large losses on the Exchange. It is important to undertake trading activity within one’s means and exploit the potential to earn more income for a bank.

We have so far seen the income side. On the expenses side, there are two major expenses, viz., interest expenses and operating expenses. There are three major parts of the deposit portfolio. Current Deposits which are interest free, Savings Deposits – which get a regulated interest rate of 3.5% in our country and Term (short & long) Deposits – for which interest rates are deregulated in India.

Thus, a bank has to find ways and means to improve the share of low cost deposits such as Current and Savings Bank. This helps them to lower interest costs. Interest rates of term deposits are largely decided by market forces. A bank keeps such interest rates at a level, at which it can garner requisite deposits in competition with other banks. These interest rates are also influenced by other instruments such as debentures, postal deposits, Government securities, provident fund, etc.

Other cost comprises depreciation, rent, utilities, legal expenses, travelling expenses, postages, telecommunication charges, stationery, etc. Banks like any other commercial organisations would ensure that wasteful expenditures are avoided, and best possible deals are achieved wherever possible. Cost benefit aspects are looked into and alternatives are explored. Thus, every effort to rationalise this segment of expenditure is made.

In a nutshell, profitability is a function of six variables:

Most of internally active banks have developed internal processes and techniques to assess and evaluate their own capital needs in the light of their risk profiles and business plans. Such banks take into account both qualitative and quantitative factors to assess economic capital. The Basel Committee now recognises that capital adequacy in relation to economic risk is a necessary condition for the long-term soundness of banks.

Thus, in addition to complying with the established minimum regulatory capital requirements, banks should critically assess their internal capital adequacy and future capital needs on the basis of risks assumed by individual lines of business, product, etc. As a part of the process for evaluating internal capital adequacy, a bank should be able to identify and evaluate its risks across all its activities to determine whether its capital levels are appropriate.

The RAROC is designed to allow all the business streams of a financial institution to be evaluated on an equal footing. Each type of risks is measured to determine both the expected and unexpected losses using VaR or worst-case type analytical model. Key to RAROC is the matching of revenues, costs and risks on transaction or portfolio basis over a defined time period.

In this approach, risk is measured in terms of variability of income. Under this framework, the frequency distribution of return, wherever possible is estimated and the Standard Deviation (SD) of this distribution is also estimated. Capital is thereafter allocated to activities as a function of this risk or volatility measure.

Then, the risky position is required to carry an expected rate of return on allocated capital, which compensates the bank for the associated incremental risk. By dimensioning all risks in terms of loss distribution and allocating capital by the volatility of the new activity, risk is aggregated and priced.

The second approach is similar to the RAROC, but depends less on capital allocation and more on cash flows or variability in earnings. This is referred to as EaR, when employed to analyse interest rate risk. Under this analytical framework also frequency distribution of returns for any one type of risk can be estimated from historical data.

Extreme outcome can be estimated from the tail of the distribution. Either a worst-case scenario could be used or Standard Deviation 1/2/2.69 could also be considered. Accordingly, each bank can restrict the maximum potential loss to certain percentage of past/current income or market value.

Thereafter, rather than moving from volatility of value through capital, this approach goes directly to current earnings implications from a risky position. This approach, however, is based on cash flows and ignores the value changes in assets and liabilities due to changes in market interest rates. It also depends upon a subjectively-specified range of the risky environments to drive the worst-case scenario.

Some activities may require large amounts of risk capital, which in turn requires higher returns. This is the essence of risk adjusted return on capital (RAROC) measures. The central objective is to establish benchmarks to evaluate the economic return of business activities. This includes transactions, products, customer trades, and business lines, as well as the entire business.

RAROC is a part of the family of the risk-adjusted performance measures (RAPM). Consider, for instance, two traders such that each returned a profit of $10 million over the last year. The first is a foreign currency trader, and second a bond trader. The question is, how do we compare their performance? This is important in providing appropriate compensation as well as deciding which line of activity to expand.

Assume the FX and bond traders have notional amount and volatility as described below. The bond trader deals in larger amounts, $200 million, but in a market with lower volatility, at 4% per annum, against $ 100 million and 12% for the FX trader. The risk capital can be computed as a VAR measure, say at the 99% level over a year, as Bankers Trust did.

Assuming normal distributions, this translates into a risk capital of:

The risk adjusted performance is then measured as the profit divided by the risk capital,

Thus the bond trader is actually performing better as the FX trader, as the activity requires less risk capital. More generally, risk capital should account for credit risk, operational risk, and any interaction.

Includes the measurement of portfolio exposure, the volatility and correlations of the risks factors.

This requires the choice of a confidence level and horizon for the VAR measure, which translates into an economic capital.

This requires the adjustment of performance for the risk capital.

Performance measurement can be based on RAPM method. For instance, Economic Value Added (EVA) focuses on the creation of value during a particular period in excess of required return on capital.

Where profits are adjusted for the cost of economic capital, with k defined as a discount rate. Assuming the whole worth is captured by the EVA, the higher the EVA, the better the product or project.

The past decade or so has been historically momentous for the banking industry in India. Starting with Narsimham committee report of 1991, Indian banking has seen a total change in the scenario during the last 18 years. The process of deregulation which was set in motion has brought in sea change in Indian banking. Regulated interest rates, directed investment/credit have become thing of the past. The Reserve Bank of India has been more concerned about prudential norms and disclosure requirements.

During the last decade, several new private sector banks have come into existence. They have diverse ownership patterns. Similarly foreign banks have been given clearances for expansion. These measures have resulted in a keen competition in the banking sector. The new entrants have brought modern technology, new products, and aggressive marketing. Public sector banks and old private sector banks had to take cognizance of these developments and change their ways. Profitability has become the most important parameter in banks’ functioning.

Indian banks have shown that they are alive to the changing environment and have geared up to face the new challenges. They have realised that the bottom-line is very critical and demonstrated their will and skills in changing colours.