In this system, electric power in excess of the immediate demand is used to pump water from a supply source (e.g., lake, river or reservoir) at a lower level to a reservoir at a higher level.

When the power demand exceeds the supply, the water is allowed to flow back down through a hydraulic turbine which drives an electric generator. The overall efficiency of the pumped storage (i.e., the percentage of the electrical energy used to pump the water that is recovered as electrical energy) is about 70 percent. 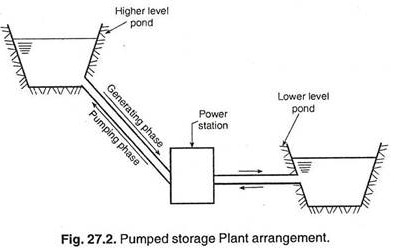 Fundamental arrangement of these plants consists in having two pools i.e., reservoirs, one at a high level, and the other at a low level with the power house at an intermediate position.

During generating phase i.e., when the turbines and generators are producing electrical power at peak loads, the water passes from higher level pool to the power house and from the power house to the lower pool. Whereas during off-peak period the pumps and motors are in opera­tion, which is known as pumping phase, water is pumped from lower pool to the higher level pool.

In pumped storage plants, the reservoir should have a capacity such that:

(i) The upper reservoir is capable of holding all the water pumped up during the pump­ing period in addition to its dead storage.

(ii) The lower reservoir should be of sufficient size so that it can receive and hold all the water that flows into it during the turbine operation in addition to its dead storage.

(i) Economical way for peak supply,

(ii) It is dependable and reliable,

(iii) It can pick up load rapidly, and

(iv) Being a hydel power, free from air and water pollution.

Although only one electric machine can be used to act as a generator as well as a motor. If turbine and pump are also combined in one pump/turbine unit, it will save a considerable cost of the unit as well as eliminate elaborate connections etc.

Since Francis turbine is just a reverse of centrifugal pump, it functions in one direction as a pump and in reverse direction as a turbine, in order to achieve best efficiency, different speeds are necessary for the two machines. However same speed is also possible with some sacrifice of the efficiency. As far as design criteria are concerned higher values are considered.

The stores energy is then released during periods of peak demand by expansion of the air through an air turbine. In general, the efficiency of compressed air storage is comparable to that of pumped hydro storage.

CAES plants include a compressor turbine. During off-peak periods the compressor driven by the motor generator, supplies compressed air which is stored in the underground reservoir. During periods of peak demand the compressed air is withdrawn from the reservoir and drives a turbine for producing electrical power. By using this CAES technology plants upto about 300 MW have been successfully functioning.

In this system the electric generator, normally connected to the turbine, must also be capable of functioning as a motor, when electricity is supplied. 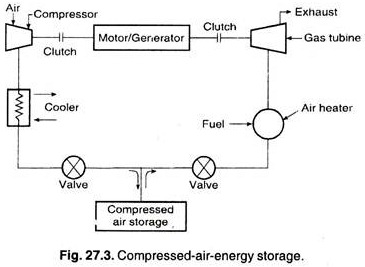 Electric power in excess of the immediate demand is supplied to the motor/generator which drives the compressor, and the compressed air at about 70 atm (7MPa), is stored in a suitable reservoir.

The air is heated, during compression and may have to be cooled. When additional power is required to meet the demand, the compressed air is released and heated using gas or oil fuel. The hot compressed air is then expanded in a gas turbine connected to the motor/generator unit which now acts as a generator.

Since the reservoirs constructed above the ground are too expensive, hence underground reservoirs, preferably existing ones are considered. These may be natural caverns, deep aqui­fers, depleted gas or oil reservoirs, mined-out rock or salt caverns or abounded mines.

The heat of compression may be retained in the compressed air or in another heat-storage medium and then restored to the air before expanding through the turbine. This is called adiabatic storage and results in high storage efficiency.