After reading this article you will learn about the relation and difference between co-ordination and co-operation.

Relationship Between Co-Ordination and Co-Operation:

Co-ordination is an orderly arrangement of group efforts to provide unity of action in the pursuit of common objectives. It means bringing together the efforts of different components of the organisation in order to give them a unity of purpose. While cooperation denotes the collective efforts by the people working in the organisation voluntarily to accomplish a particular purpose.

Existence of co-operation among the members of a group facilitates co-ordina­tion. But co-ordination does not originate from the voluntary efforts of the group members. It has to be achieved by the conscious efforts of the management.

For instance, five persons engaged in pushing a taxi out of mud have a strong attitude of co-operation. But they may not be successful unless one of them provides leader­ship and coordinates the activities of all. In the same manner, the orchestra conductor co-ordinates the efforts of the members of his group to produce fine music.

A good manager tries to achieve both because only through cooperation and coordination he can get things done through others.

Difference Between Co-Ordination and Co-Operation: 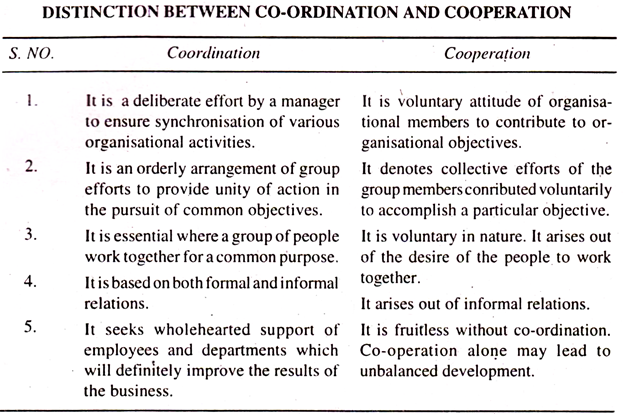