Everything you need to know about World Trade Organisation (WTO) !

Q.1. What is World Trade Organization?

Ans. The World Trade Organization (WTO) can be defined as an international organization that regulates trade and tariffs between nations in order to ensure that trade flows smoothly, predictable and as freely as possible.

The WTO was established in 1995 as the successor to the General Agreement on Tariffs and Trade (GATT), which was itself established after the Second World War. The overall system was developed through a series of trade negotiations, or rounds, held under GATT.

The main points are listed below:

1. It was created by the Uruguay Round of GATT to enforce free trade of manufactured goods, services, and intellectual property.

2. It is an international organization that monitors and enforces rules governing global trade.

3. It is designed to supervise and liberalize international trade.

4. It provides the ground rules for international trade and commerce.

5. It was created through a multilateral agreement on trade and investment.

6. It has been formed by the agreement of member nations.

Q. 2. How many countries have become member of WTO?

Ans. The membership is open to all countries. Interested countries become member of WTO. India has joined membership of WTO. Till July 27, 2007, 151 countries have become of WTO.

Q. 3. What is the Organizational Structure of WTO?

Ans. The World Trade Organization came into force on January 1, 1995, fully replacing the previous GATT Secretariat as the organization responsible for administering the international trade regime.

The basic structure of the WTO includes the:

(i) The Ministerial Conference,

(v) The Councils on Trade in Goods and Trade in Services,

(vi) The Secretariat and Director General, and

i. The Ministerial Conference:

This is composed of international trade ministers from all member countries. This is the governing body of the WTO, responsible for setting the strategic direction of the organization and making all final decisions on agreements under its wings. The Ministerial Conference meets at least once every two years. Although voting can take place, decisions are generally taken by consensus all member countries.

This is composed of senior representatives (usually ambassador level) of all members. It is responsible for overseeing the day-to-day business and Management of the WTO, and is based at the WTO headquarters in Geneva. In practice, this is the key decision-making arm of the WTO for most issues. Several of the bodies described below report directly to the General Council.

This is also composed of all the WTO members, and oversees the Trade Policy Review Mechanism, a product of the Uruguay Round. It periodically reviews the trade policies and practices of all member states. These reviews are intended to provide a general indication of how states are implementing their obligations and to contribute to improved adherence by the WTO parties to their obligations.

Disputes are heard and ruled on by dispute resolution panels chosen individually for each case, and the permanent Appellate Body that was established in 1994. Dispute resolution is mandatory and binding on all members. A final decision of the Appellate Body can only be reversed by a full consensus of the Dispute Settlement Body.

v. The Councils on Trade in Goods and Trade in Services:

These councils operate under the mandate of the General Council and are composed of all members. They provide a mechanism to oversees the details of the general and specific agreement on trade in goods (such as those on textiles and agriculture) and trade in services. There is also a Council for the Agreement on Trade-Related Aspects of Intellectual Property Rights, dealing with just that agreement and subject area.

vi. The Secretariat and Director General:

(a) Committee on trade and development (CTD), and

(b) Committee on Trade and Environment (CTE) are very important.

They have specific mandates to focus on these relationships, which are especially relevant to how the WTO deals with sustainable development issues. The Committee on Trade and Development was established in 1965. The forerunner to the Committee on Trade and Environment (the Group on Environmental Measures and International Trade) was established in 1971, but did not meet until 1992. Both Committees are now active at discussion grounds but do not actually negotiate trade rules.

Q.4. Where is the Headquarters of WTO?

Q.5. What are the Objectives of WTO?

Q.6. What are the Functions of WTO?

Ans. There are four main functions of World Trade Organization as given below:

(ii) Acting as a forum for trade negotiation

(iv) Reviewing national trade policies to improve transparency and to assess their impact.

Q.7. What are the Principles of WTO?

Ans. The WTO agreements are based on certain principles.

Some important principles of WTO are briefly presented below:

(iii) The membership is open for all countries of the world. Any country can become member of WTO.

(iv) In WTO, all countries have equal rights irrespective of their status.

(v) WTO functions purely on democratic pattern. All decisions are taken by consensus among member countries.

(vi) Each country gets guarantee for its export in the market other member countries.

(vii) WTO is the government organization. The private sector can participate only in specific activities such as seminar and symposiums.

(viii) WTO does not force any country to become its member. Interested countries join WTO.

(ix) WTO agreements keep into account various issues such as environmental safety, job opportunities and development. It does not ignore economic development.

(x) WTO improves standard by enhancing per capita income of those engaged with WTO activities.

Q.8. What are the Materials Covered for Trading under WTO?

Ans. WTO permits a variety of items for trading across the nation. The list of such items is presented in Table 50.1. 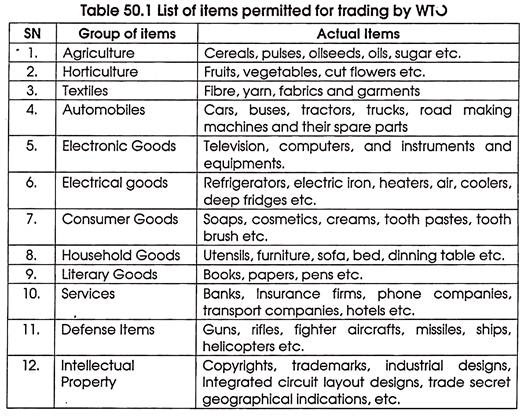 Q.9. What are the Advantages of WTO?

Ans. There are several advantages of WTO which are listed as follows:

(i) Improvement in the quality of product or service due to competition among companies.

(ii) There will be reduction in the price again due to competition among companies.

(iv) WTO provides a wide range of variety in various items for choice.

(vi) WTO leads to faster development and growth of member countries by floating their goods in international market.

(vii) Since each item is marketed by several countries, there will be no monopoly of any country.

(viii) WTO operates on democratic pattern, each country has equal rights and all decisions are taken with consensus of member countries.

(x) WTO leads to increase in the income by permitting trade across the nations.

Q.10. What are the Disadvantages of WTO?

Ans. There are two main disadvantages of WTO. Firstly it leads to several trade disputes and secondly, it has adverse effects on the growth of small industries.