Banks in their primitive form act as an intermediary by collecting money from those who have excess money and lending to those who need it for more productive purposes. However in earlier times, the lending was mostly security-oriented and the bad loans were unheard of!

The Indian banking system till early 90s was insulated from the global world and was dominated by government controls, regulations, political interferences and restricted entry to the outside world. Added to this, imperfect standards and opaque balance sheets were the tools to window-dress the deficiencies and deterioration of the banking system from the public. The low profitability, growing level of non-performing assets and relatively inadequate capital base were the causes for concern.

But the turning point came in 1991 when Prime Minister Narasimha Rao and Finance Minister Manmohan Singh announced a whole package of reforms in the name of LPG (liberalisation, privatisation and globalisation).

Identifying the causes for deterioration in the financial health of banking system over time and a need to have a healthy, vibrant and a stable banking system to give life support to the economy of the country, the Reserve Bank of India, on the recommendation of Narasimha Committee introduced the prudential norms in 1992-93.

In the background of these reforms and changes, though the problem of NPAs was belatedly recognised, but these NPAs have not arisen overnight. Rather, prior to this first phase of financial sector reforms, these NPAs were hidden under the veil of secrecy and window-dressing in the balance sheets of banks.

Banks used to follow the practice of ‘ever greening’ the bad loans by making fresh advances to such borrowers. However, with the opening up of the economy, greater transparency and trends in globalization and privatization, NPAs surfaced with a big bang.

(i) Interest and/or instalment of principal remains overdue for a period of more than 90 days in respect of term loan;

(ii) The account remains ‘out of order’ for a period of more than 90 days in respect of an overdraft/cash credit;

(iii) Interest and/or instalment of principal remains overdue for two harvest seasons but for a period not exceeding two half years in case of an advance granted for agriculture purposes.

(iv) Any amount to be received remains overdue for a period of more than 90 days in respect of other accounts.

The advances are classified into four broad groups:

i. Standard Assets – Such assets don’t disclose any problem and don’t carry more than normal risk attached to the business. Such an asset is not a non-performing asset.

ii. Sub Standard Assets – It is classified as non-performing asset for a period not exceeding 12 months. Such an asset will have well defined credit weaknesses that jeopardize liquidation of the debt and are characterized by distinct possibility that the bank will sustain some loss.

iii. Doubtful Assets – Assets, which have remained NPAs for a period exceeding 12 months. It means any NPA would migrate from sub-standard to doubtful category after 12 months.

iv. Loss Assets – A loss asset is one where loss has been identified by the bank or internal/external auditors or RBI inspectors but the amount has not been written off, wholly or partially Any NPA would get classified as loss asset if it were irrecoverable or only marginally collectible and cannot be classified as bankable asset.

Impact of Non-Performing Assets on Banks:

The Non-performing Assets represent idle physical assets in the economy. NPA affects the profitability, liquidity and the competitive functioning of the banking industry. NPAs impose a double burden – first while providing for them and the second by putting a constraint on the bank’s ability to lend further.

It is very difficult to contain and manage any problem until and unless we know the causes behind the emergence and growth of that problem.

The important causes behind the loan accounts turning non-performing are:

i. Political influences and compulsions while sanctioning, rescheduling, restructuring and recollecting the loans.

ii. Legal environment causing not only delay in recovery of dues but also more geared to protect borrowers, not lenders.

iv. Diversion of funds for the purpose other than for what the funds were borrowed. 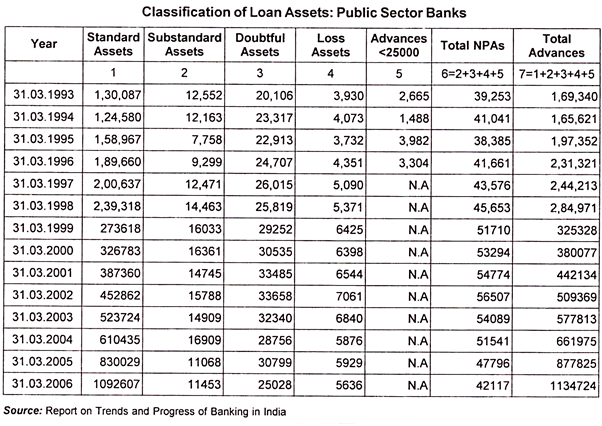 Analysis of Growth of Non-Performing Assets in Various Banks: 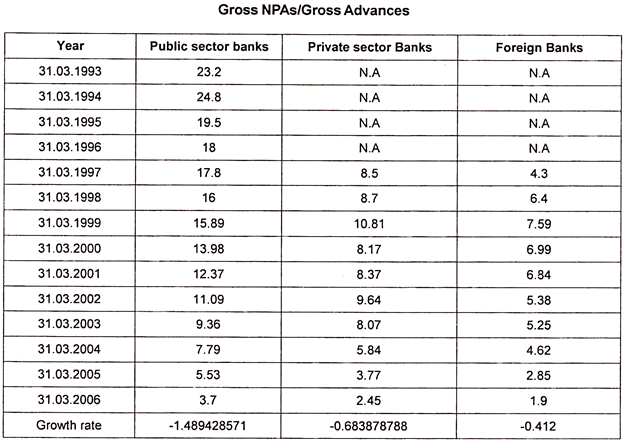 Measures to Manage the Non-Performing Advances:

The huge piles of NPAs had continued to be a major drag on the performance of banks. The large volume of NPAs reflects both a legacy of past dues and an ongoing problem of fresh accretion.

A number of corrective and preventive measures have been taken from time to time as explained below:

The efficiency of all these measures is analysed on the basis of amount recovered through various measures as shown in the following table: 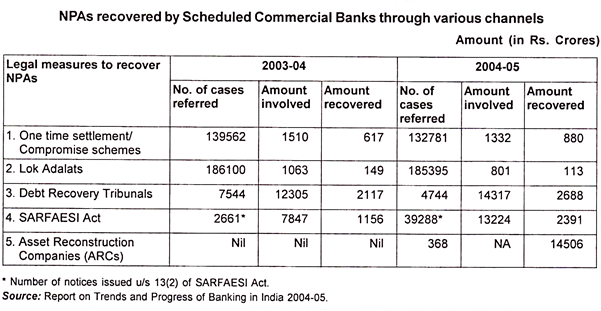 Besides these legal measures, a number of non-legal and preventive measures have been taken like recovery camps, rehabilitation of sick units, loan compromises, warning system, circulation of list of defaulters, credit rating, proper follow-up etc.

Banks are already taking a number of preventive and corrective measures to reduce the level of NPAs in their portfolio. But to my mind, there cannot be a quick-fix solution to solve this problem. What the banks need to do is to adopt a holistic approach and come out with a detailed plan calling for the different strategies a credit facility passes through.

It is suggested that the banks should be more transparent as regards their loan portfolio. They should clearly spell out the absolute figures of NPAs as well as the ratios on quarterly basis as the practice followed in other countries.

Everyone knows that the sources of any advance becoming non- performing is the standard advance. The standard advances if not recovered, slip into sub-standard category and then become doubtful and ultimately lost asset. In accounting, the principle of “Conservatism” is followed i.e. “anticipate no profits but provide for all losses”. On this ground, provisioning norms are introduced by banks. But if banks are creating provisions on non-performing advances, can’t they create reserve on standard advances?

Though there is a practice of taking some security from borrowers before giving loan, but had that security been liquid, sufficient and adequate, the problem of non-performing advances would not have arisen! To my mind, instead of taking some collateral, banks should take some hard cash from borrowers.