Term Paper # 1. Introduction to the Balance of Payments:

Balance of Payments or BOP is a historical summary of a country’s foreign exchange inflows and outflows that occurred during a particular time period (usually one year). It is a record of the cross-border activities between a country and the rest of the world and is prepared by its central bank. The BOP holds a central position in International Finance.

It influences the economic strength of a country and the strength of the domestic currency in the foreign exchange market. The IMF extends multilateral aid to member-countries based on the severity of their BOP imbalances. The BOP position also affects a country’s sovereign rating, the availability and cost of overseas funding. A country is judged by its BOP position and its augury for the future.

Balance of trade is just one component of Balance of Payments (BOP). If a country’s BOT is positive but its BOP is negative, what is the effect on the exchange rate? Will the domestic currency appreciate or depreciate, irrespective of whether the country follows a fixed exchange rate or a floating exchange rate? How relevant is BOP in explaining the exchange rate? This article considers such issues.

The BOP is a statistical record of a country’s past inflows and outflows of foreign currency. Examining trends in a country’s BOP of over a number of years and comparing it with trends of other countries, permits an assessment over time and across countries.

i. Trends in a country’s BOP affect international expectations. Trends have a ‘signalling’ effect, and indicate that the country’s future prospects are bright or bleak. If India consistently runs a BOP surplus over the next five years, international investors will conclude that the government’s policies of liberalization and privatization have paid off, and that the country is a safe investment destination.

If, on the other hand, India continues to run a negative BOB and the size of the BOP deficit has been increasing, it will be viewed less favourably. International investors will expect the country to request multilateral aid, implemented aid conditionalities, and possibly face civic and political unrest. This will make them decide on other investment destinations.

iv. The BOP is an ex-post analysis of the flow of foreign exchange. It merely records past information of activities between a country and the rest of the world. As such it has limited relevance as a corrective tool. Policy makers use this trend to calibrate or alter economic policies, and to assess policy changes in terms of their impact on the BOP position. The IMF uses a country’s BOP position as a basis for granting a loan.

The BOP contains a list of debit balances and a list of credit balances. The balances can be shown in the country’s domestic currency, or in an internationally accepted currency such as the US dollar. The RBI’s website presents India’s BOP in rupee terms, and again in dollar terms. How is the BOP prepared?

Such transactions during a particular year (for example, in 2011-12) are:

a. Imports by Indian companies – $15 million.

b. Gifts made by Indians to persons overseas – $1 million.

d. The Indian government gave aid of $6 million, to an African country that suffered from severe floods.

Such transactions during a particular year (for example, in 2011-12) are:

a. Exports by Indian companies – $30 million

b. Gifts of $3 million given by persons overseas to Indian citizens.

d. The Indian government received $10 million as aid from the US government.

The foreign exchange inflows and outflows balances are summarized in the Balance of Payments as shown in Table 12.1. 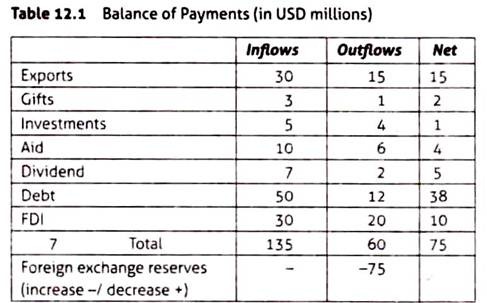 Since the country’s net receipts were $75 million ($135 million — $60 million), the country had a BOP surplus in 2011—12. But this ordering of items does not distinguish between short-term (one year or less) and long-term items. The distinction is important because the government and monetary authorities plan for repayments, and on how to invest foreign exchange surpluses.

Sometimes, ad hoc measures are resorted to, and this is an indication of the dire straits a country is in. In 1991, India had foreign exchange reserves enough to pay only a few weeks’ worth of its import bill. This forced the government to pledge gold as collateral overseas, and borrow money to meet repayments. Therefore, the BOP is divided into two components—the current account and the capital account.

Term Paper # 2. Components of the BOP:

Short-term foreign exchange inflows and outflows are grouped into visible and invisible items.

Trade in Goods and Services:

A country whose principal exports are primary products is more likely to experience a negative BOT. The greater the range of goods exported and the higher up the value chain the goods are, the less vulnerable the country is to negative (unfavourable) terms of trade. BOT can be improved by broad-basing exports, improving the quality of domestic goods and services, charging competitive prices in international markets, and by moving up the value chain in terms of exports.

These include travel, transportation, insurance, business financial, communication and miscellaneous services. Residents use foreign exchange for travel overseas (tourism, medical treatment, education) and it causes foreign exchange outflows. When residents from other countries travel to India, they bring foreign exchange which is converted into domestic currency.

Inflows and outflows on the capital account are grouped into two categories:

Table 12.2 is the redrawn BOP arranged component-wise. Note that the term ‘merchandise’ is used instead of imports and exports. 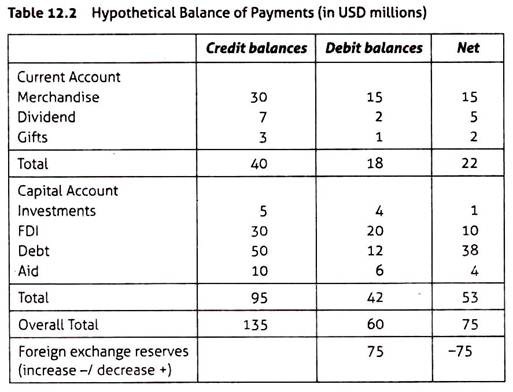 India’s principal exports consist of primary products, leather items, manufactured goods, chemicals, textile and textile products, engineering goods, handicrafts, gems, and petroleum products. Primary products are divided into two categories ― agriculture and allied products (coffee, fruits and vegetables, tobacco, spices, and wheat), minerals and ores (mica, iron ore, and other ores). In 1994-95, 21% of India’s exports were to countries in Asia. In spite of signing several bilateral agreements with Asian countries, and efforts to increase trade with ASEAN countries, this percentage has not increased.

In terms of shifts in composition of exports between 1994-95 and 2008-09, following trends were observed: 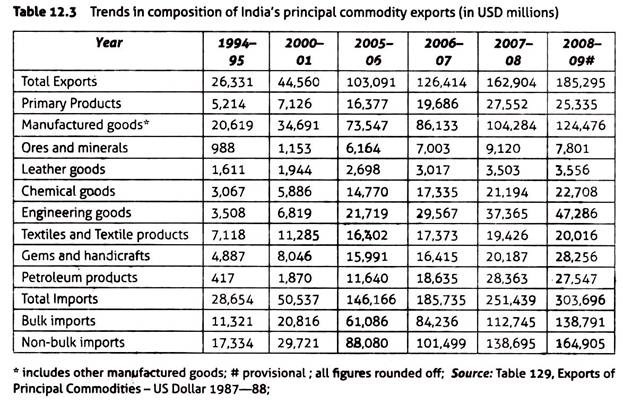 Non-bulk imports include capital goods, such as machine tools, electrical machinery, computer goods, transportation equipment, electronic goods, and project goods, imports of export related items such as pearls, inorganic chemicals, cashew nuts, textile and yarn, gold and silver, and chemical materials. Between 1999-2000 and 2005-06, imports of petroleum, gold and silver, and gems had a significant share in total imports. Non-bulk imports constituted 60% of imports in 1994-95, and 54% in 2008-09. 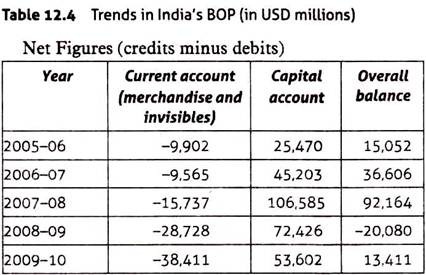 Though the BOP is prepared using the double entry system, the figures do not always add up since data is collected from multiple sources. Therefore, the BOP carries a column titled ‘errors and omissions’. In the above table, the errors in each of the five years were (in USD millions) -516,968, 1,316, 1,401, and -1,746 respectively.

India ran a BOP surplus from 2006-07 to 2009-10, with the exception of 2008-09. The BOP surpluses arose in spite of consistent current account deficits. When compared to current account balances of major emerging market economies, Brazil and China, there is scope for substantial improvement.

The robustness of BOP and the adequacy of foreign exchange reserves are assessed at a point in time with reference to several parameters:

i. Ratio of Short-Term Debt to Foreign Exchange Reserves:

Volatile capital consists of foreign portfolio outflows, and short-term overseas debt. In September 2006 the ratio was 42% in India compared to 146.6% in March 1991, according to the Report on FCAC (2006).

External debt is the amount that the residents of a country are contractually obligated to pay to non-residents. India’s external debt forms 11% its sovereign debt, and most of it is from bilateral and multilateral sources. According to the Status Report on India’s External Debt 2009-10 (Ministry of Finance), India’s debt to GDP ratio fell from 38.7% in 1991-92 to 18.9 % in 2009-10.

Eighty-nine percent of India’s sovereign debt is from domestic sources, out of which 51% is held by commercial banks and 22% by insurance companies.

The central bank need not maintain foreign exchange reserves, because the exchange rate is determined by market forces. But many countries on a managed float (including India) continue to hold foreign exchange reserves as they are viewed as a necessity. They provide a cushion against shocks which could arise from changes in global oil prices, uncertain monsoons, and high levels of public debt.

In general when the BOP is favourable, a country’s leverage in world markets rises. Investors perceive the country as being worth the risk, and international rating agencies raise the credit rating of the country (sovereign rating) based on its improved credit worthiness. This in turn means that funds can be raised at lower rates in the Eurocurrency market and in the American market.