In this type of organisation business activities are divided into three groups, namely fi­nance and accounts, production and sales. Each of this department is sub-divided into certain self-contained departments, i.e., sections.

Each departmental head has sole control over his section and has full authority to select his labour, staff, purchase of raw materials, stores and to set the standards of output, etc. Foreman of each shop trains new men and supervises the quality of output.

In such a system superior exercises a direct authority over his subordinates who become entirely responsible for their performance to the commanding superior. No operation is under two bosses:

The following is the chart of line organisation:

As in this organisation, the flow of authority moves from top to bottom in vertical lines, therefore, this is also called line or scalar organisation.

4. As responsibility of each individual is fixed, hence faults can be easily and quickly known.

5. Everybody from top to bottom remains busy like a machine and hence total cost of product will be less.

6. It is simple to understand.

7. Flexible and able to extend or contract.

1. It requires different departmental heads to be expert in their respective functions, hence lack of specialisation.

2. Departmental heads are over-burdened with various routine jobs, hence no time for further expansion and planning.

3. Certain people become key points and they are loaded maximum with work.

4. Chances of accidents, wastage of material and labour are more because of insufficient knowledge of all the work by one man.

5. Chances of delay in reaching the orders of General Manager or any other departmen­tal head upto the workers and, therefore, possibility of distortion, due to long chan­nel.

6. Over-burdened foreman may not be able to give sufficient time for each job and will cause wastage and error.

7. It has no means of rewarding good workers.

1. Such organisations are suitable for factories of small and medium size, in which sub­ordinate and operational staff is not too much.

3. Suitable where labour problems are not difficult to solve.

4. Suitable where automatic plants are used.

The difficulties in finding all round qualified man to be foreman in the line organisation are overcome with this type of organisation. He is replaced by various functionalised people.

This system is advantageous because each supervisor is specialised in a particular field and he attends to one factor in all the departments. Below is its layout:

In chart (b) these different bosses are just like foreman. In some factory, they are called foreman and in another factory they may be designated as gang boss, speed boss etc. Each boss goes to individual workman for instructing and guiding about his activity.

Chart (b) is a short and simplified form showing the structure of functional type of organisaion, chart (c) shows the order of authority and the stages in the organisation.

In this, specialised people like chemists, purchasers, engineers, designers etc. are employed under the production superintendent and everybody is supposed to give his functionalised ad­vice to all other foreman (bosses) and workers. Every foreman (boss) will go to individual worker for his related function.

This type of organisation is sometime called “Taylor’s organisation” as it was for the first time introduced by F.W.Taylor. Taylor said that the well qualified foreman required brain, education (special or technical knowledge), manual strength, tact, energy, hon­esty, judgment or common sense and good health.

He believed that a man with three of these qualities could be hired at any time. If four were required, it was necessary to secure a higher priced man. The man combining five of the qualities was hard to find and the one with six, seven or eight almost impossible to discover.

Therefore, Taylor employed functionalised bosses and as far as the workman was concerned, instead of coming in contact with the management at one point, only he was to receive his daily orders and help directly from eight different bosses. Four of these were located in the planning room and four in the shop as shown in chart (c).

1. Due to specialisation quality of work is better.

2. This system provides more specialised knowledge and guidance to individual workers through experts.

3. It helps mass production by standardisation and specialisation.

4. If any operation needs improvement, it can be improved even upto the last moment.

5. Considerable expansion of the factory is possible.

6. Since for every operation expert guidance is there, hence wastage of material will be minimum which will reduce prime cost.

7. Unnecessary overloading of responsibilities will not be there, as was in the case of line organisation.

8. No special knowledge of workers is required as the instructions are supplied by draw­ing and experts. 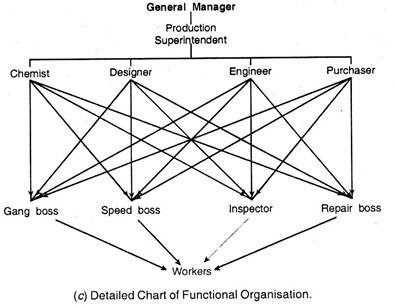 1. It is complicated from control point of view as every functionalized expert feels him­self to be superior than the other and there is no one-man control over the workers. Therefore, it makes discipline problem difficult to solve among lower level.

2. By employing high waged experts, the total cost of job may become high.

3. As line workers will not be using their skill, their initiative cannot be utilised.

4. Shifting of responsibility is possible.

5. The failure of any of the expert will largely affect the production because, if any expert tells wrong operation, there is no other body to correct him. This will result in large wastage of material.

6. Proper co-ordination of the work of different departments is required but it is difficult to maintain as everybody is working individually.

In practice a pure functionalised system is rarely found. In fact, a factory where responsibilities are divided on a functional basis, line relationship may also exist. This is suitable for large manufacturing concerns which are capable of expansion in future.

In a firm of large size operating on big scale, managers cannot give careful attention to every part of management. They are unable to think and plan. They are busy with ordinary task of production and selling. Hence ‘Some Staff is deputed to do other works like investiga­tion, research, recording, planning and advising to managers.

Thus staff brings specialisation by assisting the line officers. The line maintains discipline and stability. Staff provides expert information and helps to improve the overall efficiency. Thus the staffs are ‘thinkers’ while lines are ‘doers’.

A staff man usually controls one function of business of which he is an expert. Usually the staff has no administrative authority, but an expert in some phase of operation. He reports to the executive and gives the advice on the subject of his specialty.

1. It is a planned specialised system.

2. Quality of product will be better.

3. Wastage will be less.

5. Sufficient time is available to general manager for future planning and expansion.

6. Discipline problem is solved because of line relationship.

1. Sufficient expert knowledge and guidance is not available as compared with func­tional type.

2. Lack of responsibility among higher levels and hence the discipline as a whole will be poor.

3. The overhead cost of product may rise, because of high salaried staff.

4. The slackness of any section or department will largely affect whole working.

Now-a-days this type of organisation is preferred for medium and large scale industries, depending upon internal structure, nature of productive activities and span of business area. It is applied in automobile industries and other intermittent nature of industries. 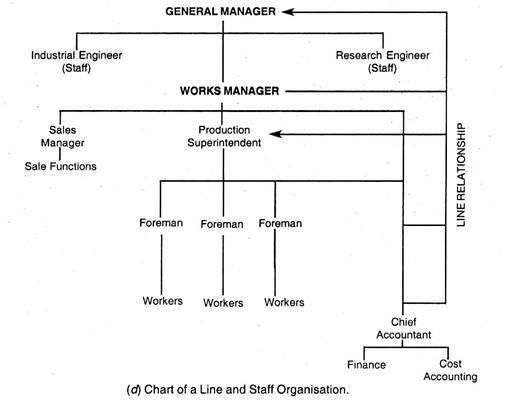 Because of scientific methods, enough market competition and complications in the busi­ness, to obtain a sound system, the combination of line, staff and functional type of organisation is required.

In this system, as regards the discipline and output are concerned, the workers are kept under the direct control of foreman.

As regards quality, the inspector will have the proper authority to control the quality and he can directly order the workman as in the functional organisation.

In the staff relationship, there may be research department for the analysis of raw materi­als, semi-finished and finished products to withstand market competition.

In this way all the three are combined together and as this is complicated in nature, there­fore, also called complicated type of organisation.

Now-a-days this pattern is followed by all government and private concerns, in which much complicated processes or operations are involved, i.e., in big chemical plants, electricity boards, steel plants and other huge undertakings.

A committee is a group of persons formed for the purpose of giving advice on certain important problems, which cannot usually be solved by an individual. It helps by pooling the thoughts of several persons on problems involving several functions and offered for criticism. Therefore, now-a-days many large companies add a network of committees to the line and staff organisation.

These committees may be either “Permanent” sometimes referred to as standing committees or they may be organised to serve a temporary function only. Examples of commit­tees are Research Committee, Co-ordination, and Advisory Committee, Purchase Committee, Education Committee etc. 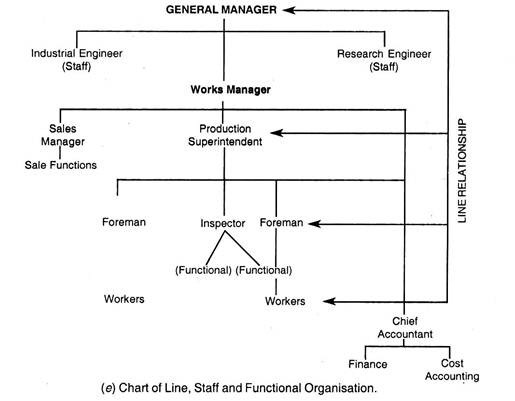 A committee is a tool for the development of ideas and recommendations of policy and procedure. It brings better plans and policies for operations and results in better co-operation in their execution. The final decision to put committee recommendations into action rests with the line. The committee simply performs advisory function.

Actually, the committee is similar to the staff and several owners think it a costly substitute for staff but it is found that no other method is so effective in solving common problems or in getting new ideas as committee organisation of collective judgment.

Committee like other forms of organisation should be varied according to the needs of a given organisation.

However, there are certain basic principles given below, which must be considered:

1. In this, members should be minimum, i.e., generally 3 to 5. This is found by experi­ence that too many members result in much wasted time by lengthy discussions and delayed decisions.

2. The chairman of the committee must prepare the agenda to be discussed much in advance of the meeting and circulate among the members so that they can get suffi­cient time to think over the problems to be discussed.

3. The chairman must control the behaviour and discipline among the members when the meeting is held so that there is least wasted time and thought.

4. Meetings should begin and end at fixed time.

5. Duties, authorities and responsibilities must be clearly defined and owing to circum­stances they can be subject to changes.

6. The meetings should be conducted from an agenda containing those things which require attention arranged in the order of their importance.

7. All the members must realise that more time can be wasted unless each member co­operates sincerely to save the time of other members.

1. Since “two” heads are better than “one”, quick and valuable decisions can be taken.

2. By this, time schedule and proper follow up are instituted which causes speedy ac­tion.

3. Decision taken is impersonal which leave the chairman free from personal criticism.

4. As the members are from the plant side, they know better what is going on in the shops and can give the correct suggestions and team up with other persons and de­partments.

5. There is a stimulus towards co-operative action.

1. Sometimes the committees may be too large in strength which cause delayed actions and wasted time.

2. It is an expensive form of organisation as outside members are paid travelling allow­ance and honorarium for attending the meetings.

3. Committees tend to hang on after its usefulness is over.

4. As members are from different departments, they may not reach to a final conclusion at all.