In this article we will discuss about the effects of organisation mission on objectives of a business.

An organisation must first establish an overall mission or purpose before it determines its objectives. The organisational mission identifies the function that the organisation intends to perform within its social or economic system. As shown in the diagram below, specific objectives, strategies, programmes, policies and plans are formulated and developed only after the basic mission is established. 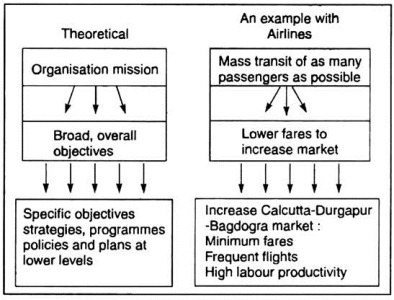 The above diagram shows the relationships among mission, objectives and other plans of organisation.

Thus, the mission identifies the company’s target customers and the types of commodity or services it will provide.

The man at the helm of affairs (say, the President) is not very much concerned with the corporate mission in the short run, since missions do not change very often. He would inherit an organisation, products or services, and customers. But the mission would be very important to him as a new president.

As a top manager, he should spend his time in seeking answers to questions such as:

What business are we in?

Where are we headed?

Where should we be headed?

Role of Customers in Determining Mission:

A key aspect of an organisation’s mission is to identify the persons who will be the ultimate users of the services or products. Just who is the customer? India’s Airlines tries to get the comparatively lesser affluent travellers to change from cars and buses and trains to planes. Modi Telstra pursues a different type of customer by marketing cellular phones for individuals.

Different missions lead to different objectives, strategies, programmes, policies and plans. For example, IBM focussed on large businesses as customers for its computers and business products. But when it introduced IBM-PC, it set up an entirely new unit to produce and sell it to individual purchasers.

In nutshell, all types of organisations, even professional sports, must set objectives.

A model of the key steps, an organisation must take, in determining its economic mission is shown below: 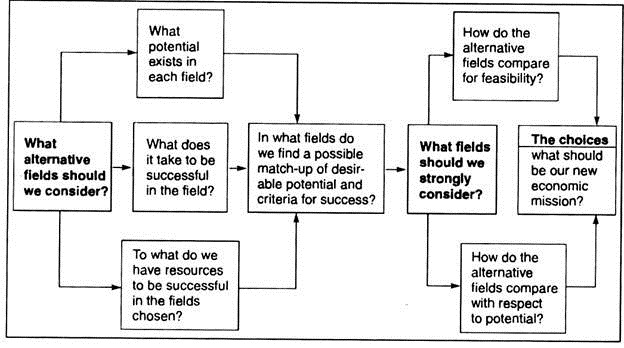 The model above attempts to formulate an economic mission in its endeavour to answer – ‘What kind of business should we be in?’