After reading this article you will learn about the span of management and its relation with organisational level.

The term “span of control” or “span of management” is defines “the number of subordinates who are working under one manager.”

According to Spreigel, the principle “span of control implies that no single executive should have more people looking to him for guidance and leadership than he can reasonably be expected to serve.”

There will be many subordinates who report to their manager in a wider span of control, while a manager has fewer subordinates in a narrow span of control. Thus, the relationship between the span of management and the organisational levels are shown in figure 8.1 and 8.2. 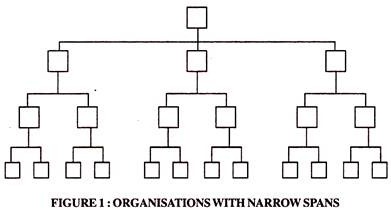 It must be decided that how many subordinates a superior can manage. Students of Management have found that this number is usually four to eight subordinates at the upper levels of organisation and eight to fifteen or more at the lower levels.

For example, the prominent British Consultant Lyndall Urwick found “the ideal number of subordinates for all superior authorities to be four”, and all the lowest level of organisation, where what is delegated is responsibility for the performance of specific tasks and not for the supervision of others, the number may be eight or twelve.

In a survey of 100 large companies made by the American Management Association, the number of executives reporting to the presidents varied from one to twenty-four and only twenty-six presidents had six or fewer subordinates, the median number was nine. It forty-one smaller companies surveyed, twenty-five of the presidents supervised seven or more subordinates and the most common number was eight.