India has the largest number of listed companies in the world, and the efficiency and well-being of the financial markets is critical for the economy in particular and the society as a whole. It is imperative to design and implement a dynamic mechanism of corporate governance, which protects the interests of relevant stakeholders without hindering the growth of enterprises.

Corporate governance is the framework for creating long-term trust between companies and the external providers of capital. Corporate governance involves a, set of relationships amongst the company’s management, its board of directors, its shareholders, its auditors and other stakeholders.

These relationships, which involve various rules and incentives, provide the structure through which the objectives of the company are set, and the means of attaining these objectives as well as monitoring performance are determined. Thus, the key aspects of good corporate governance include transparency of corporate structures and operations; the accountability of managers and the boards to shareholders; and corporate responsibility towards stakeholders.

Good corporate governance—the extent to which companies are run in an open and honest manner—is important for overall market confidence, the efficiency of capital allocation, the growth and development of countries’ industrial bases, and ultimately the nations’ overall wealth and welfare.

Companies around the world are realizing that better corporate governance adds considerable value to their operational performance:

i. It improves strategic thinking at the top by inducting independent directors who bring a wealth of experience, and a host of new ideas.

ii. It rationalizes the management and monitoring of risk that a firm faces globally. It limits the liability of top management and directors, by carefully articulating the decision making process.

iii. It assures the integrity of financial reports.

iv. It has long-term reputational effects among key stakeholders, both internally and externally.

This issue of whether a company should be run solely in the interest of the shareholders or whether it should take into account the interest of all constituents has been widely discussed and debated.

In India, the shareholder vs. stakeholder debate has been resolved by taking the view that since shareholders are residual claimants, in well performing capital and financial markets, whatever maximises shareholder value should maximise corporate prosperity and best satisfy the claims of creditors, employees, shareholders, and the State.

Moreover, there exist well-defined laws to protect the interests of employees, and recently framed legislations have considerably strengthened the rights of the creditors. In this context it is appropriate that corporate governance regulations in India seek to promote the rights of shareholders, while at; the same time ensure the interests of other stakeholders are not adversely impacted.

Some of these are:

At the same time given the increasing interdependence and integration of financial markets around the world it was felt that it is important that some degree of uniformity and coherence is established in the laws of all countries. With this objective the Organisation for Economic Co-operation and Development (OECD) Council, meeting at Ministerial level on 27-28 April 1998, called upon the OECD to develop, in conjunction with national governments, other relevant international organizations and the private sector, a set of corporate governance standards and guidelines.

In order to fulfill this objective, the OECD established the Ad-Hoc Task Force on Corporate Governance to develop a set of non-binding principles that embody the views of OECD countries on this issue.

In April 2004, the governments of the 30 OECD countries approved a version of the OECD’s Principles of Corporate Governance for good practice in corporate behavior with a view to rebuilding and maintaining public trust in companies and stock markets. These principles call on governments to ensure effective regulatory frameworks and on companies to be more accountable.

The principles include increased awareness among institutional investors, enhanced role for shareholders in executive compensation, greater transparency and effective disclosures to counter conflicts of interest.

More than a year before the onset of the Asian crisis, CII set up a committee to examine corporate governance issues, and recommend a voluntary code of best practices. The committee was driven by the conviction that good corporate governance was essential for Indian companies to access domestic as well as global capital at competitive rates.

The first draft of the code was prepared by April 1997, and the final document (Desirable Corporate Governance – A Code), was publicly released in April 1998. The code was voluntary, contained detailed provisions, and focused on listed companies.

While the CII code was well received and some progressive companies adopted it, it was felt that under Indian conditions a statutory rather than a voluntary code would be more purposeful, and meaningful. Consequently, the second major corporate governance initiative in the country was undertaken by SEBI.

In early 1999, it set up a committee under Kumar Mangalam Birla to promote and raise the standards of good corporate governance. In early 2000, the SEBI board accepted and ratified key recommendations of this committee, and these were incorporated into Clause 49 of the Listing Agreement of the Stock Exchanges.

The Naresh Chandra Committee was appointed in August 2002 by the Department of Company Affairs (DCA) under the Ministry of Finance and Company Affairs to examine various corporate governance issues. The Committee submitted its report in December 2002. It made recommendations on two key aspects of corporate governance – financial and non-financial disclosures and independent auditing and board oversight of management.

SEBI has incorporated the recommendations made by the Narayana Murthy Committee on Corporate Governance too in Clause 49 of the listing agreement. The revised Clause 49 has been made effective from January 1, 2006.

The system of ‘independent directors’ in order to secure good corporate governance in Indian listed companies. An independent director has been defined as, ‘a non-executive director who, apart from receiving director’s remuneration, does not have any pecuniary relationships with the company, its promoters or associates, and is not a relative’.

Both Naresh Chandra and Narayana Murthy Committees have ignored the complexity caused by the existence of controlling blocks in most of the Indian companies. In such a situation, an independent director is a weak instrument for ensuring good governance, because he is ‘elected’ to the Board by the grace of the controlling group itself.

All the listed companies pursuant to clause 49 of the Listing Agreement should include a ‘Report on Corporate Governance’ in their annual report. This report should give details of company’s philosophy on code of governance, Board of Directors, their attendance at the board meetings, various committees—their functions, members, meetings held during the year, disclosures regarding the transactions entered into with directors or the management, their relatives, code of conduct, means of communication, general shareholder information, etc. The main objective of providing this report is to enable the shareholder to have an idea of what is going on in the company.

In the backdrop of this information the investors were enquired whether they have gone through Corporate Governance Reports given in annual reports. Their response is given in Table 12.1.

The above Table 12.1 reveals that more than 70 percent of the investors have gone through corporate governance reports included in the annual reports. It is heartening to know that a large number of investors have gone through them. However, does that report serve any purpose? Have they made use of any information given in those reports in their investment decisions? These questions are answered in Table 12.2.

The investors pick are given the following Table 12.3:

From the Table 12.3 it can be understood that the shareholder information provided in the corporate governance reports is widely used by the investors in making their investment decisions.

The shareholder information as provided by the report incorporates wide range of details from the date of annual general meetings to listing details, stock price data to distribution of shareholding and categories of shareholding, investor grievance received to investor correspondence details. The investors also use information on disclosures, investors’ grievance committee and Board of Directors details.

Further the investors were asked to give their opinion on corporate governance related statements on a five point scale ranging from strongly agree to strongly disagree. The mean values and standard deviation of values from mean values of these statements are given in Table 12.4. 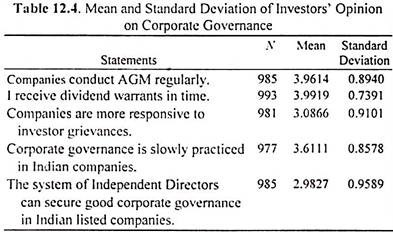 Table 12.4 reveals that the investors’ opinions regarding various issues relating to corporate governance are not the same. The investors could neither agree nor disagree with the statements ‘companies are more responsive to investor grievances’ and ‘the system of independent directors can secure good corporate governance in Indian listed companies –  It seems they would like to adopt a wait and see approach before giving their opinion on these two statements.

However, their opinions on other statements indicate that they accept companies conduct annual general meetings regularly, they receive their dividends on time and corporate governance is slowly practiced in Indian companies. Their level agreement is more in case of former two statements than the last one. The standard deviations of values from the mean values for all the statements are low indicating the high level of uniformity among the investors in agreeing to these.