After reading this article you will learn about the meaning and means of departmentation.

The term department designates a distinct area, division or branch of an organisation over which a manager has authority for the performance of specified activities. A department, as the term is generally used, may be the production division, the sales department, the market research section, or the accounts receivable unit.

Departmentation refers to the formal structure of the organisation, composed of various departments and managerial positions and their relationships to each other. As an organisation grows, its departments grow and more subunits are created, which in turn add more levels of management.

This often creates less flexibility, and the unit of action within the firm. Departmentation is the efficient and effective grouping of jobs into meaningful work units to coordinate numerous jobs all for the expeditious accomplishment of the organisations objectives.

The chief means of departmentation are by the following:

This is most common form of departmentation. This is based on specialised functions such as production, finance, sales and marketing, personnel and research and development.

This structure of departmentation can be shown as follows:

Figure 6.1 shows that production, marketing, finance and personnel are most common functions in most organisations. The Vice-President of each function is responsible for these functions. It is used mainly by smaller firms that offer a limited line of products because it makes efficient use of specialized resources.

Some of the disadvantages are that, it becomes more difficult to get quick decisions or action on a problem because functional managers have to report to central headquarters and may have to wait a long time before a request for help is acted.

Further, it is often harder to determine accountability and judge performance. Finally, coordinating the functions of members of the entire organisation may become a problem for top managers.

This method places all the resources and authority under one manager to get a product or service produced and marketed. Here, units are formed based on type of product. For example General Motors has six divisions which are decentralised and independent.

These are: Chevrolet, Buick, Pontiae, Oldsmobile, Cadillac and GMC trucks;

The departmentation by products will be as follows:

It facilitates the measurement of managerial as well as operative results and the contribution of each product line to the organisation’s total profits can be evaluated.

The major disadvantages of this type is that it promotes fierce internal competition which may or may not be healthy and there is a lack of coordination among different divisions unless the central management retains the policy making and financial management authority.

This organisational form is used when great emphasis is placed on effectively serving different customer types. For example: full-time day students and part-time night students of graduate business programmes in universities usually are different in demographic profile and personal needs. An organisation may be divided into industrial product buyers and customer product buyers.

A division based on the loans customers in a bank is shown below:

The divisions may be based on geographical basis. It is specially useful for large scale enterprises which are geographically spread out. For example, banking, insurance sometimes these divisions may be in different regions within the country and sometimes, the divisions, in case of multinational organisations, may be in various countries . This type of deparmentation can be shown as follows.

The organisation which are working around the clock are generally departmentalized on the basis of time shifts. Example, hospitals and telecom. Here, telephone company may have a day shift, an evening shift and the night shift.

A different department may exist for each shift.

This type of department may be as follows:

In this type of departmentalization, decisions are made fast, because the decisions are made at a point near the operation. It helps divisions flexible to adopt to any changes which might occur and it releases top management for more important central decisions and also the expansion is easier since any other facility can be added if necessary.

The major disadvantages of these decisions is the duplication of work, since each division will have its own staff and specialists. Moreover, since each division is responsible for profit and loss, sometimes the divisional interests may take priority over organisational goals.

This may be shown as follows:

Territorial departmentation is especially popular for sales where division appears feasible according to some geographic market segregation. It also provides a good arrangement for training and developing because the executive can demonstrate ability in a certain territory and thus merit promotion to a more important area.

This can be shown as follows: 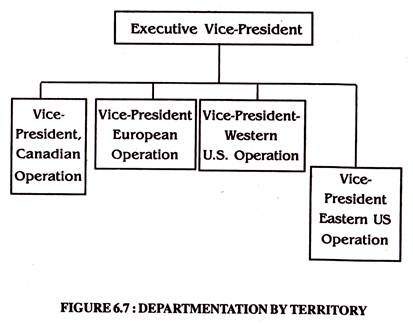 This arrangement involves assigning a team or task force to a definite project or block of work, which extends from the beginning to the completion of a wanted and definite type and quantity of work. A task force is usually relatively small. It exists for the life of the project and then disbanded.

It is in keeping with new decision-making theories that are inclusive in their scope of operations it encourages objectivity it gives workers a free hand to accomplish the objective, and it emphasizes each member’s initiative and creativity in work efforts. This type of departmentation may be as follows. 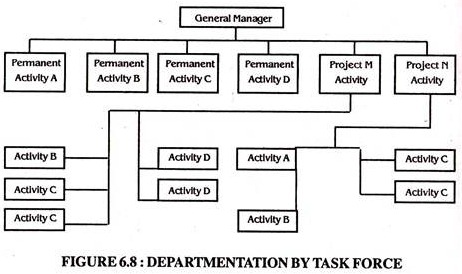