In this essay we will discuss about:- 1. Meaning of Activity Based Costing (ABC) 2. ABC Proper 3. ABC Objectives 4. ABC System Procedure 5. Cost Reduction through ABC 6. ABC and Management.

All these means of Cost leadership fall within the territory of a cost reduction programme. Accomplishment of this programme requires several managerial interventions and these are possible only if the managers are equipped with relevant and accurate cost related information. Activity Based Costing (ABC) and its management can provide such information necessary to achieve cost leadership.

The underlying philosophy of ABC is that the cost responsibility should be shared by all functions of an organisation. ABC technique gives visibility to costs by detailing the organisation’s activities, their interrelationship and their respective costs. It categorises all inputs by the way in which they are consumed and that leads to an analysis focusing on cost reduction opportunities.

Activity Based Costing is a technique which breaks down the work process into various activities and tries to work out cost of each of these activities.

Further, each of these activities is broken down into two components:

(i) Value-Added components (VA), and

The non-value-added (NVA) components represent typically the activities that the firm’s customers would rather not pay for. Unnecessary copying and filing, checking, chasing and correcting, overtime working, etc. are the common NVA activities. By collecting the total NVA cost by process, it is possible to priorities and bring in improvements in the activities done in the organisation.

To make the ABC technique effective, performance targets are set for both of VA and NVA components and all-out efforts are made to continually improve upon the VA components, and to reduce and ultimately eliminate the NVA components.

The basic objectives of ABC are two-fold:

1. Validating the success of quality drive with it, and

2. Optimising the costs in response to price resistance in market.

The above objectives are achieved as follows:

(i) Gauging the efficiency of different activity;

(iv) Pinning down the hidden costs; and

So, ABC is a special technique to reengineer the existing costing system through identification of various activities at functional level and to capture the costs involved in delivering the desired products and/or services, and it helps in finding out costs to a greater accuracy.

The system procedures to design the ABC consist of:

1. Development of linear model of cost flow, which requires consideration of:

(i) Both direct and indirect costs;

2. Identification of Steps for Implementation, which requires consideration of Variables as outlined in eight boxes under ‘Input Level’. See Fig. 2.

3. Design of Cost Pool according to organisation Tree Structure, duly classified in major heads like—

(i) Division: Cost Pool 1: consisting of one or more departments;

(ii) Department: Cost Pool 2: consisting of one or more sections;

(iii) Section: Cost Pool 3: consisting of one or more units; and

The Fig. 3 gives an illustration in respect of Switch Gear division of a firm.

7. Identification of the most suitable cost driver in each activity (See Fig. 4).

8. Preparation of Activity-wise Cost Matrix, which requires consideration of costs and cost driver volume rates. The Fig. 6 is an illustration. 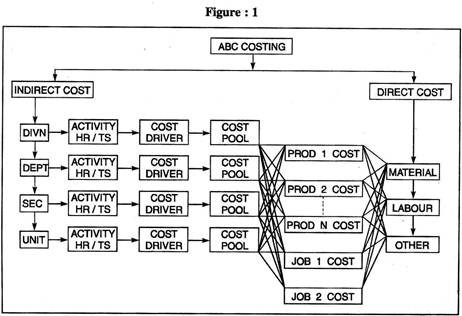 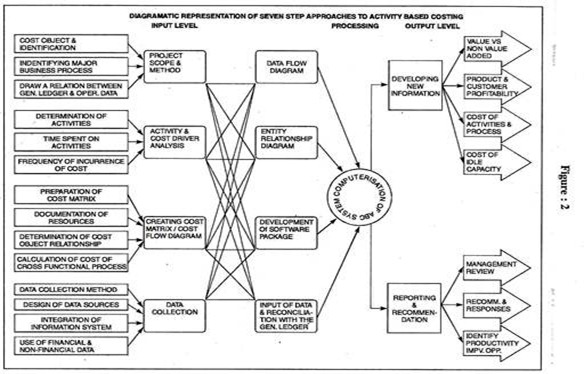 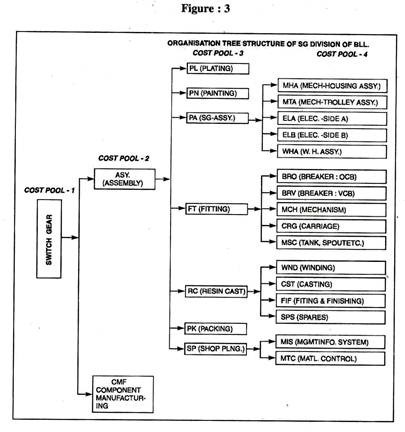 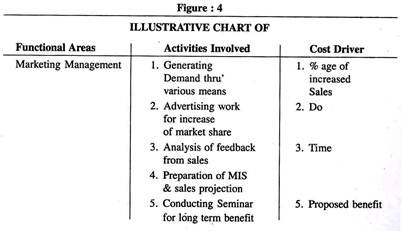 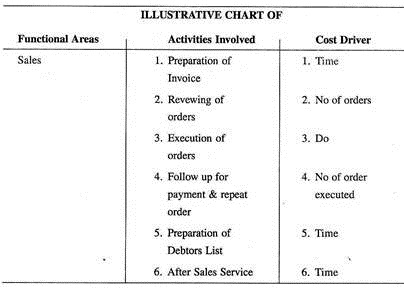 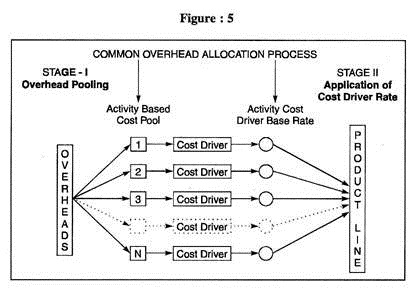 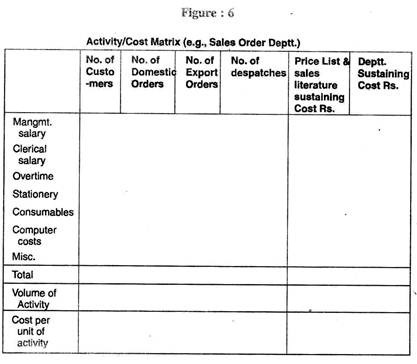 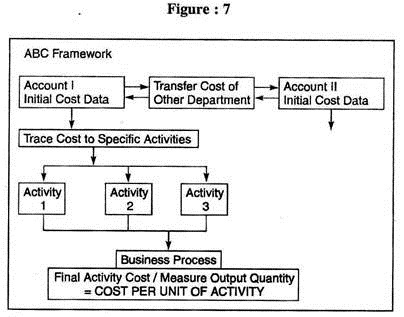 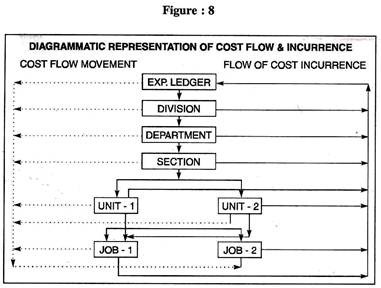 The scheme of cost reduction through ABC, to sum up, requires the following:

(i) Resources to be classified in volume-based and value-based resources;

(iii) No-value activity to be minimised as far as possible;

(iv) Process and procedure to be changed/redesigned, if required;

(v) Areas where cost reduction is possible to be identified; and

(vi) Outcome of cost reduction project to be matched with what premium buyers want to pay in the market. 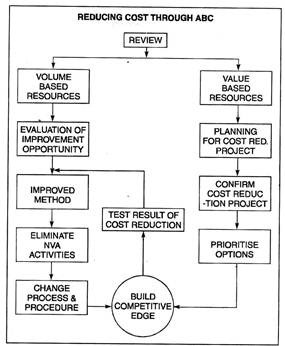 In today’s environment of competition and globalization, when each organisation has to continuously benchmark its activities with the most efficient in the world, one cannot do without ABC. The very survival of a firm today depends on proper management of the value chain at each stage.

Unless one knows the value added at each stage as compared to its costs for that value addition, one cannot decide about cutting the unimportant activities or adding the new ones.

Most of the recent approaches being followed for improving overall competitiveness and productivity of the business such as target costing, TQM, BPR and others depend heavily upon accurate cost information for various activities and comparison of these with the value the stakeholders attribute to them. Without exact cost information such exercises are meaningless.

The main benefits of ABC arise from the quality of managerial decisions based on more accurate information. This is the most promising aspect of ABC which is now being called Activity Based Management (ABM). ABM views the activities in a dynamic sense rather than just a step for cost allocation to the end products.

It uses the cost information generated by ABC about an activity for controlling the activity itself rather than using the cost of the final products only. The cost drivers that trigger the activity are also identified and monitored. These cost drivers may be different from the resource or activity drivers.

In addition performance measures are developed and monitored to judge the efficiency at which the activity is being performed. These measures may be financial or non-financial variables such as cost per unit of activity driver, defects per million items produced or time taken per unit of item produced.

These measures then provide a sound basis to control the performance of the activity with accurate information about the costs involved.