After reading this article you will learn about conflict management in an organisation.

A study of change and development would remain largely incomplete if we do not make a passing reference to conflict management. One major problem faced by managers in carrying out organisa­tional development programmes is excessive conflict between either individuals or departments. What is more significant is the amount of time a manager spends in dealing with or managing conflict.

Conflict in any work environment is inevitable for the simple reason that whenever people have to work together they will not always be in perfect agreement on all issues, goals, or perceptions. From this emerges a definition of conflict — a “disagreement between two or more organisational members or groups arising from the fact they must share resources of work activities and/or from the fact that they have different status, goals, values or perceptions.” In short, conflict refers to any kind of opposition or antagonistic intersection between two or more parties.

Conflict can occur throughout the organisation: between one individual and another, between groups, between groups and individuals and the organisation. In general it arises due to problems in communication (e.g., misunderstandings due to semantics, unfamiliar language, or ambiguous or incomplete information), personal relationships (e.g., incompatibility of personal goals or social values of employees with the role behaviour required by their jobs, or organisational structure (e.g., power struggles between departments with conflicting objectives or reward systems, competition for scarce resources, or interdependence of two or more groups to achieve certain common goals).

Conflict may also arise due to certain personality characteristics, such as authoritarianism or dogmatism. Such conflict resolution is difficult.

We present below a two-dimensional conflict model that classifies behaviour according to the intent of the conflicting parties. See Fig.15.8. 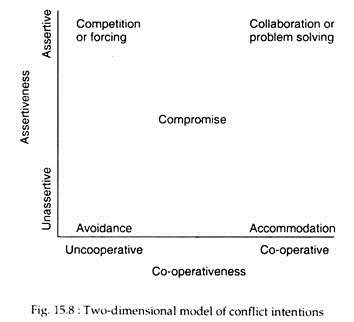 On the horizontal axis we measure ‘cooperativeness’ and on the vertical axis ‘assertiveness’ defined as attempting to satisfy one’s own desires. The model brings into focus four other behavioural outcomes- avoidance, accommodation “[one party surrenders (gives in) to another], com­promise (each party is willing to ‘give a little’), and collaboration or problem-solving (each is willing to seek a solution that improves the position of both parties).

There are four methods of resolving conflict — forcing, problem-solving, compromise and avoid­ance. The first two are the most preferred method. The first method (forcing) works well in most organisations. The mechanism is simple enough: one party uses superior power to impose a solution.

The second method works like this — parties to the conflict seek a solution that will satisfy the goals of each. This method is most successful in settling conflicts caused by communication problems, whereas forcing is the only method used with some success in conflicts of personal values or personality. Table 15.6 provides situational indicators that are helpful in choosing between a problem-solving and a forcing approach.